By David Cervigni June 11, 2019 Labels: STRIDE Threat Modeling
The major threat for a threat mode (pls excuse me for the wording game) is to feel lost on the vast "sea" of things that can go wrong, and how to prioritize them. This feeling of vastness, or the opinion that everything needs to go inside the TM, is the first enemy or getting the TM done. So, don't panic and get the thing done...so, where to start?
A good place to start is the highest diagram of the architecture of the system itself. It is not something meant to be used to TM but is useful as a starting point for the analysis. You also have limited time, let's focus on the most important things and prioritize them. It is often the case that teams perform threat modeling after the design phase, or when the system is already in production. In this case, this practice could be considered technical debt, and you might find out that already many mitigations and countermeasures are in place to defend against threat agents. In this case, bear in mind that the threat is present and need to be documented even in the case that the risk impact is prevented to happen; we'll see how in the next parts.

1) Define what you care about

...the famous "What are we building?" question we presented in the 1st part. It is useful at this stage to have a high-level diagram of the architecture of the system, the one that engineers usually have.

Assets and attackers in or out-of-scope

I'm not an advocate of Data Flow Diagrams (example in part 4), especially when it is the engineering team to threat model a single system. It doesn't mean you don't need to consider data flows in-scope, even when (especially), they come from an out-of-scope asset. I actually consider data flows and trust boundaries essential to threat model! An example will show better this situation:

This kind of documentation should be already available to the developer team and is the starting point of the analysis.

We can annotate it (I usually use https://www.draw.io/ to import the original architecture image and draw on top of it): 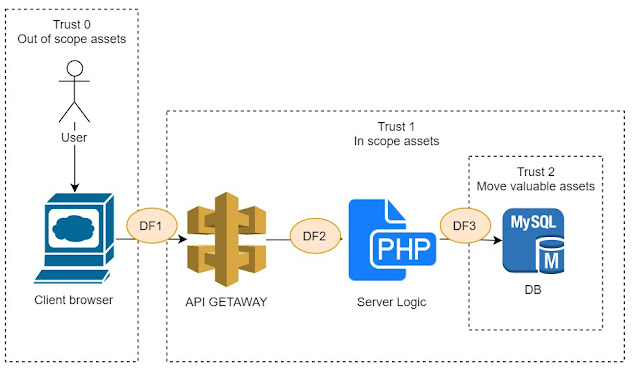 At this point we start to have a few assets:

Congratulations, now you can start to use a taxonomy S.T.R.I.D.E. or  C.I.A. and some other techniques to enumerates the threats on the system (and answer the big question "What can go wrong").

Following this approach you will be able  to:
In the next parts, we'll explore, among other things:
At this point, by putting boundaries and limits at the TM, people involved will feel that the task itself is more approachable, and can focus on the most important threats...and get the thing done!